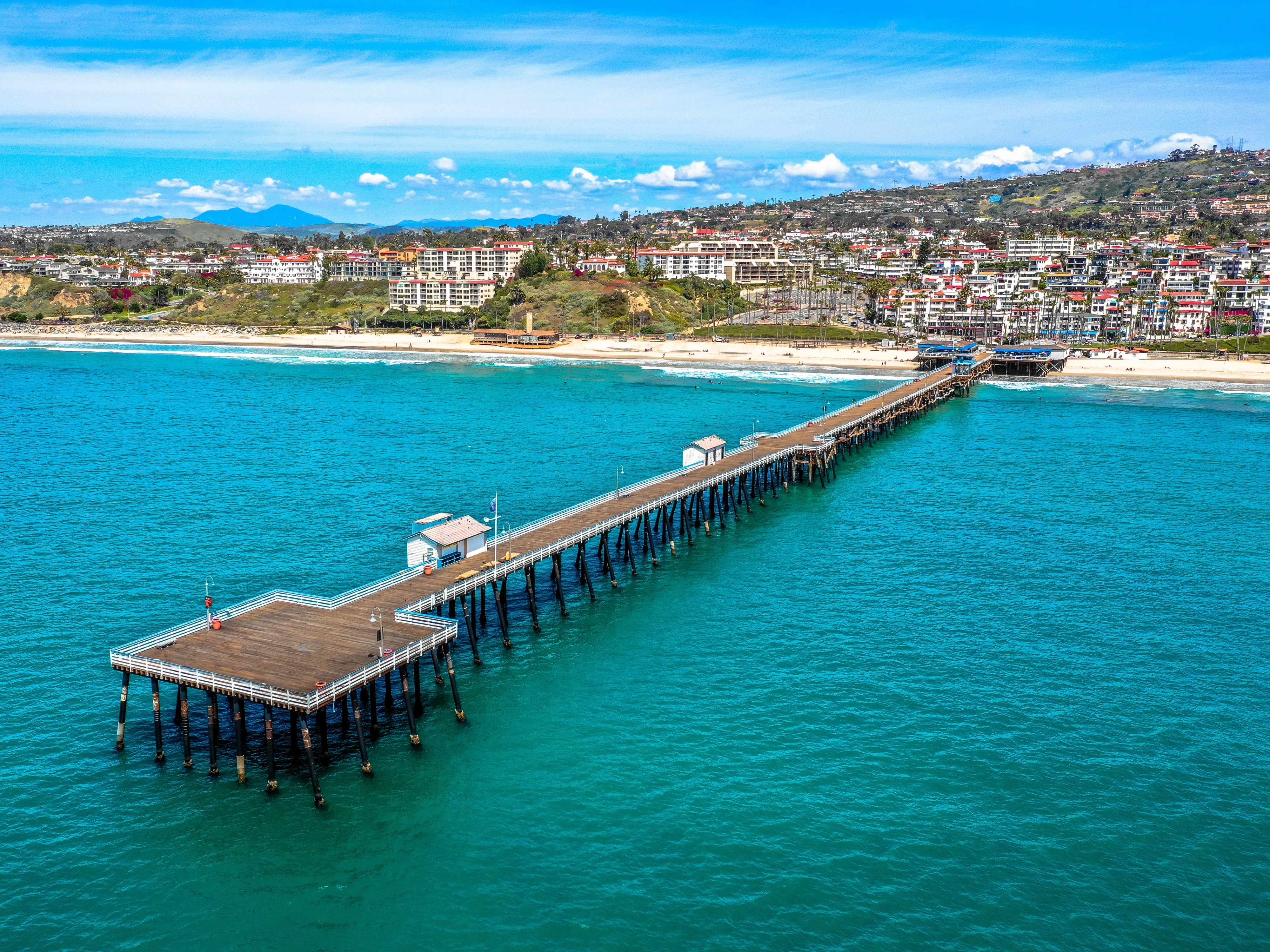 San Clemente is a coastal city in Orange County, California, United States. The population was 63,522 in at the 2010 census. Located on the California Coast, midway between Los Angeles and San Diego, the southernmost city of Orange County is known for its ocean, hill, and mountain views, a pleasant climate and its Spanish colonial-style architecture. San Clemente’s city slogan is “Spanish Village by the Sea”. The official city flower is the bougainvillea, and the official city tree is the coral. San Clemente is also the southernmost city in the Los Angeles metropolitan area.

Early colonization
Prior to colonization by Spaniards, the area was inhabited by the Acjachemen people. In 1776 Father Junípero Serra founded Mission San Juan Capistrano, and afterward the local indigenous people were dubbed “Juaneños” in Spanish. Both Native Americans and Spanish settlers established villages near the mission, and local indigenous people were conscripted to work for the mission.

Becoming a city
Property rights to the land exchanged hands several times, but few ventured to build on it until 1925, when former Mayor of Seattle, Ole Hanson, an out-of-town major land developer, purchased and designed a 2,000-acre (8.1 km2) community with the financial help of a syndicate headed by Hamilton Cotton. Hanson believed the area’s pleasant climate, beautiful beaches, and fertile soil would serve as a haven to Californians tired of “the big city.” He named the city after San Clemente Island, which in turn was named by the explorer Sebastián Vizcaino in 1602 after Saint Clement. Hanson envisioned it as a Mediterranean-style coastal resort town, his “San Clemente by the Sea.” He had a clause added to the deeds requiring all building plans to be submitted to an architectural review board in an effort to ensure future development would retain red tile roofs and white exteriors. This proved to be short-lived; an eclectic mix of building styles is found in the oldest parts of town.

Hanson succeeded in promoting the new area and selling property. He built public structures such as the Beach Club, the community center, the pier and San Clemente Plaza, now known as Max Berg Plaza Park. The area was officially incorporated as a city on February 27, 1928, with a council-manager government.

Referring to the way he would develop the city, Hanson proclaimed, “I have a clean canvas and I am determined to paint a clean picture. Think of it – a canvas five miles long and one and one-half miles wide!… My San Clemente by the Sea.”

Soon after San Clemente was incorporated, the need for a fire station was realized. The headlines in San Clemente’s first newspaper, El Heraldo de San Clemente June 1928 read: “Building to house local fire department will be constructed by popular subscription and turned over to the city when completed!” Individual subscriptions were received in the amounts from $6.00 to $1,500.00 from the citizenry.

Nixon’s “Western White House”
In 1969, President Richard Nixon bought part of the H. H. Cotton estate, one of the original homes built by one of Hanson’s partners. Nixon called it “La Casa Pacifica” and was nicknamed the “Western White House,” a term for a President’s vacation home. It sits above one of the West Coast’s premier surfing spots, Trestles, and just north of historic surfing beach San Onofre. Many world leaders visited the home during Nixon’s tenure, including Soviet general secretary Leonid Brezhnev, Mexican President Gustavo Díaz Ordaz, Prime Minister of Japan Eisaku Satō, Henry Kissinger, and businessman Bebe Rebozo. After his resignation, Nixon retired to San Clemente to write his memoirs. He sold the home in 1980 and moved to New York City. The property also has historical ties to the Democratic side of the aisle; prior to Nixon’s tenure at the estate, H. H. Cotton was known to host Franklin D. Roosevelt, who would visit to play cards in a small outbuilding overlooking the Pacific Ocean.

One of the most iconic landmarks in San Clemente is the San Clemente Pier. The first constructed pier was built in 1928 and was 1,200 feet long. This pier was built at no cost to the residents and its intention was for fishing and pleasure. In 1939 and 1983 the pier was damaged due to storms but has since been reconstructed into the pier it is today. The pier hosts the Fisherman’s Restaurant & Bar where people eat while watching the waves crash below. The pier is perpendicular to the San Clemente Beach trail which starts at North Beach and goes as far as Califia, extending 2.6 miles out along the beaches of San Clemente. The San Clemente Beach trail is a popular place for locals to walk or run, with the most crowded times being morning and around sunset. Dogs are allowed on the beach trail, however not on the beach.

Known as the “Spanish Village by the Sea”, San Clemente has long been known for its Spanish style architecture. Downtown San Clemente restaurants and shops are adorned with red tile roofs, cream stucco walls, and dark wood doors and windows. The historic “North Beach” area is home to San Clemente’s Casino Building and Ole Hanson Beach Club, which were renovated in 2010 and 2016. The homes in the area range in style, but stick to the Spanish theme for the most part. The area’s oldest homes are in Southwest San Clemente, directly south of downtown and “North Beach” area, directly north of downtown. The homes in the Southwest Riviera neighborhood include several new constructions in the Cape Cod style, as well as new modern residences. More traditional, older homes sit in the Lasuen “boot” district; the neighborhood surrounding Lasuens or “Lost Winds” beach is characterized by a variety of styles in both single and double story fashion, with Hansons’s traditional Spanish style sprinkled throughout, crafting an eclectic atmosphere. The renovations to historic buildings in North Beach have sparked a revival in the area, attracting new residents and business owners.

Interstate 5 runs through San Clemente. The Foothill Transportation Corridor (SR 241) had proposed to connect Mission Viejo to the Orange/San Diego county line, running along the east side of San Clemente and through San Onofre State Beach on its way to I-5. The California Coastal Commission rejected this proposal 8–2. Reasons cited for rejection included: the road’s alignment through a state park, endangered species habitat, and a Native American archaeological site, and the runoff from the road damaging the state park and surf break. The Federal Government rejected the proposal to place the toll road in accordance with the TCA proposal. This decision was viewed as a major defeat for the TCA and great victory for The Surfrider Foundation (which is based in San Clemente), and for assorted environmental groups. Although other alternatives have been considered, TCA has no current plans to extend the SR 241 corridor through San Clemente.

In 2016, San Clemente began offering residents free trolley service. The San Clemente Trolley service provides three open-air (windowless) trolleys that cruise throughout the coastal areas of town and pick people up at designated stops every 15 minutes. The trolley is available Memorial Day weekend through Labor Day weekend. The funding for the San Clemente Trolley came from a $1.2 million grant from the Orange County Transportation Authority (OCTA) which the city applied for. The grant will cover most of the costs for the service for seven years. The grant requires the city to fund a portion of the trolley service at $146,000 over the seven-year grant period. The Friends of the San Clemente Beaches, Parks & Recreation Foundation provided a donation of $10,000 towards the funding of the capital costs of the trolley.

The following companies have their corporate headquarters in San Clemente:

The city has a large concentration of surfboard shapers and manufacturers. Additionally, numerous world-renowned surfers were raised in San Clemente or took up long-term residence in town, including Shane Beschen, Mike Parsons (originally from Laguna Beach).

The city is served by Capistrano Unified School District.

San Clemente High School has an IB (International Baccalaureate) Program and a large number of AP (advanced placement) courses. Students at San Clemente High School have received academic accolades and hosted groups ranging from national title winning dance teams to award-winning orchestras, bands, voice groups and one of the nation’s most skilled athletic programs; these groups have also received opportunities to perform at various venues including Carnegie Hall (madrigals and orchestra), various venues in Hawaii (marching band), and many others.

San Clemente was the setting of the MTV reality show Life of Ryan.

It was also the setting of the 2005 film Brick. The town was chosen because it was particularly close to the director Rian Johnson who lived there and went to San Clemente High School, which was the school depicted in the film. Many of the locations in the film are still identical to the real ones, with the exception of the Pin’s house, which was flattened a week after exterior shooting; the interior was constructed in a local warehouse. The football field has also since been replaced with artificial turf and track. The phone booths used all through the film are mostly props that were placed on location. The movie One of Her Own is based on incidents in and around San Clemente.[citation needed]

If you are a San Clemente, CA home buyer, our foremost goal is to provide you with exceptional customer service. Our goals are to help you purchase the right home, make sure you don’t miss out on any homes that meet your needs, and make sure you don’t pay too much for your next home. Please utilize our San Clemente, California real estate expertise to make your home search and buying experience as stress free and rewarding for you and your family as possible.

If you're considering selling your San Clemente, California home, we utilize the latest, cutting-edge, real estate marketing tools to expose your property to the widest range of potential buyers. We are here to get your house aggressively marketed to sell as quickly as possible and for the best price! Our goals are to help you get your San Clemente, CA home sold, put you in the strongest negotiating position as possible, and to make it easier for you and reduce surprises.