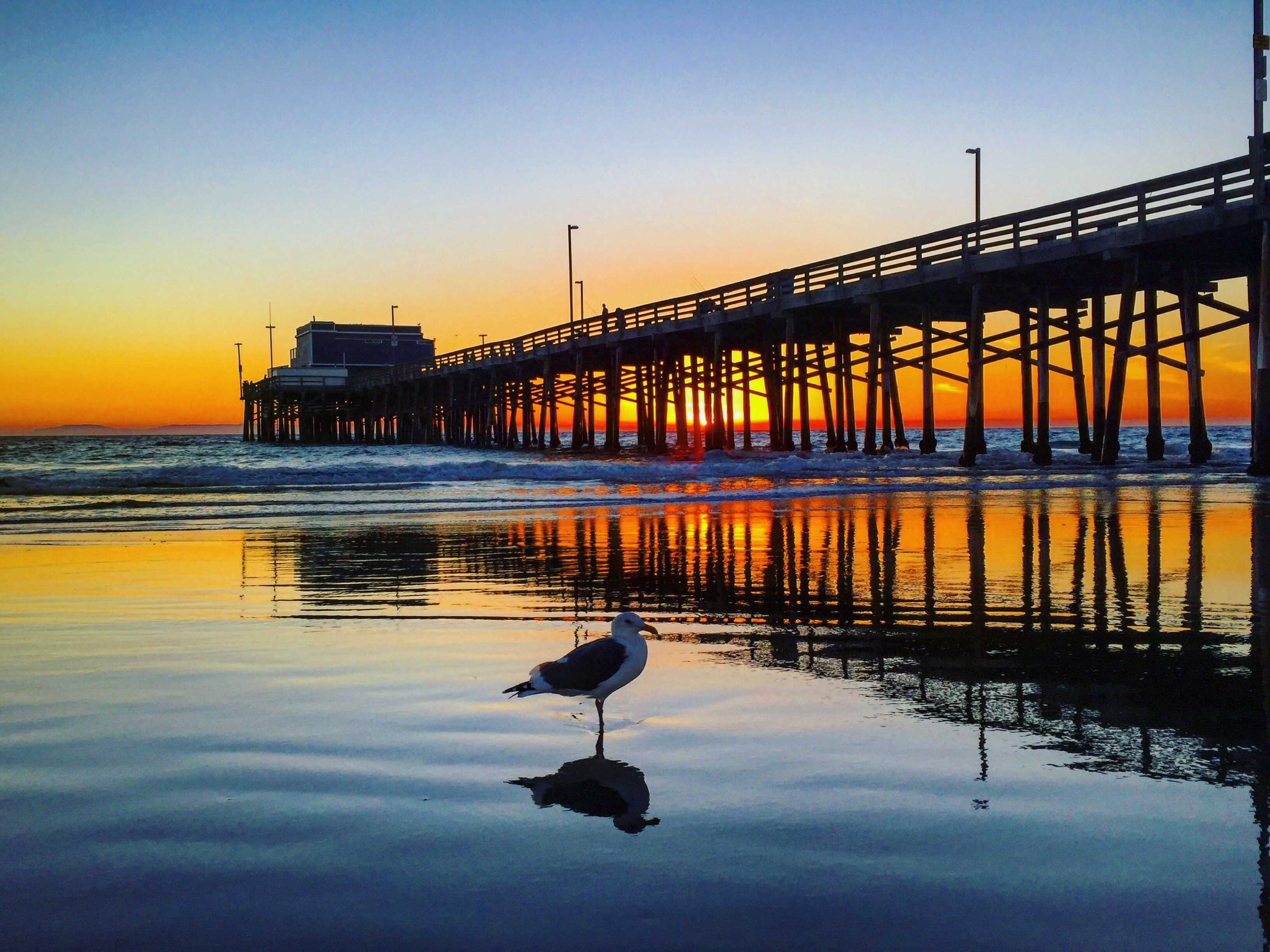 Newport Beach is a coastal city in Orange County, California, United States. Newport Beach is known for swimming and sandy beaches. Newport Harbor once supported maritime industries, but today, it is used mostly for recreation. Balboa Island draws visitors with a waterfront path and easy access from the ferry to the shops and restaurants.

The Upper Bay of Newport is a canyon, which was carved by a stream in the Pleistocene period. The Lower Bay of Newport was formed much later by sand that was brought along by ocean currents, which constructed the offshore beach that is now recognized as the Balboa Peninsula of Newport Beach.

For thousands of years, the Tongva people lived on the land in an extensive, thriving community. Throughout the 1800s, Europeans colonized the land and forcibly removed and assimilated the Tongva. Present day Newport Beach exists upon the unceded homelands of the Tongva people, and they have a historical and continued presence as the traditional caretakers of the land. The State of California sold acre-plots of land for $1 a piece in the Newport area. Anglo-American inhabitation in the area grew substantially following the events of 1870 when a 105-ton steamer named The Vaquero, captained by Captain Samuel S. Dunnells (against warnings posted by surveyors) safely steered through the lower and upper bay of Newport where it unloaded its cargo. James Irvine, after hearing the astonishing news, quickly traveled from his home in San Francisco to the San Joaquin Ranch. Meeting in Irvine’s ranch house near current day UC Irvine with his brother, Robert Irvine, and friend James McFadden, they all agreed that the newly found port should be named simply, “Newport” thus where Newport Beach gets its name. James McFadden built a long McFadden Wharf in 1888.

In 1905, city development increased when Pacific Electric Railway established a southern terminus in Newport connecting the beach with downtown Los Angeles. In 1906 (with a population of 206 citizens), the scattered settlements were incorporated as the City of Newport Beach.

Settlements filled in on the Peninsula, West Newport, Newport Island, Balboa Island and Lido Isle. In 1923, Corona del Mar was annexed and in 2002, Newport Coast, East Santa Ana Heights and San Joaquin Hills, were annexed. In 2008, after a long battle with the city of Costa Mesa, Newport Beach annexed West Santa Ana Heights.

Newport Harbor once supported maritime industries such as boatbuilding, shipbuilding, and commercial fishing, but today it is used mostly for recreation. Its shores are occupied mostly by private homes and private docks. With approximately 9,000 boats, Newport Harbor is one of the largest recreational boat harbors on the U.S. west coast. It’s a popular destination for all boating activities, including sailing, fishing, rowing, canoeing, kayaking, and paddleboarding.

The north end of the Newport Harbor channels surrounding Lido Isle has a number of small business centers and was at one time used as a home by the fishing fleets. On the North East side of the channel, the Lido Marina Village now acts as the local port to many “Newport Party Boats” that can be rented for events, as well as small merchants and local restaurants. It also hosts the area boat show each year and an organic “Farmers Market” on Sundays, in addition to being the port for the local Gondola Company. In 2014, the center was closed for a renovation. The Lido Village was reopened in 2017 after a complete renovation.

In 1927, a home was built at the mouth of the entrance of Newport Harbor that came to be known as the China House of China Cove. The home was built using the traditional Chinese architecture. It was a landmark in the Newport Beach Harbor until it was demolished in the 1980s. Some of the original roof can be seen on a home located in the China Cove.

Newport Beach has 8 fire stations spread across the city, as well as Lifeguard Headquarters at the base of the Newport Pier.

The Marine Division of the NBFD is responsible for lifeguarding the nearly 10 million annual visitors to Newport Beach’s 6.2 miles (10.0 km) of ocean and 2.5 miles (4.0 km) of bay beaches. In 2013 alone the marine division performed 3,811 water rescues. Newport Beach Lifeguards are recognized as the top agency in the nation, considering their relatively small size. They are also recognized as an advanced agency by the United States Lifesaving Association.

Included in their area is The Wedge, a spot located at the extreme east end of the Balboa Peninsula that is known for its large wedge shaped waves, which make it a popular spot for skimboarding, surfing, bodyboarding and bodysurfing. During a south or south/southwest swell of the right size and aligned in the swell window, the Wedge can produce huge waves up to 30 feet (9.1 m) high. Newport Beach has one of the most diverse coastlines in the world, spanning over 6 miles. And because of this the NBFD Marine Operations Division requires Ocean Lifeguards to be in top shape and to have years of local ocean experience.

Housing prices in Newport Beach ranked eighth highest in the United States in a 2009 survey.

Newport Beach is home to one Fortune 500 company, insurer Pacific Life. Other companies based in Newport Beach include Acacia Research, Galardi Group (Wienerschnitzel), Chipotle Mexican Grill, The Original Hamburger Stand, and Tastee-Freez, the Irvine Company, Jazz Semiconductor, PIMCO, and Urban Decay. Fletcher Jones Motor Cars in Newport Beach is the largest Mercedes-Benz dealership in the world. At one time Edwards Theatres had its headquarters in Newport Beach. Before its dissolution Air California was headquartered in Newport Beach. The city’s largest law firm is Stradling Yocca Carlson & Rauth, with approximately 75 attorneys at its Fashion Island location. Toyota has a design center, Calty Design Research, in Newport Beach which is responsible for the exterior design of the 2nd, 5th, and 7th generation Celica, as well as some Lexus and Scion models.

Beachgoers have flocked to Newport Beach since the Pacific Electric Railway started bringing them in 1905. Attractions include the city beaches from the Santa Ana River to the tip of the Balboa Peninsula, Corona del Mar State Beach, and the beaches at Crystal Cove State Park. Newport Beach is known for good surfing, especially between Newport Pier and the Santa Ana River. At the tip of the Balboa Peninsula, The Wedge offers world-class bodyboarding and bodysurfing. Newport Pier and Balboa Pier draw fishermen and sightseers. A boardwalk runs 2.9 miles (4.7 km) from 36th Street in West Newport, past Newport Pier and Balboa Pier, to between E and F Streets on the Balboa Peninsula for both pedestrians and bikers.

Newport Harbor is the largest recreational boat harbor on the U.S. west coast, and a popular destination for all boating activities, including sailing, fishing, rowing, kayaking, and paddleboarding.[citation needed]

The annual Christmas Boat Parade started in 1908. The New York Times has called it, “One of the top ten holiday happenings in the nation”.

Competitive sailing, rowing, and paddling events are common. The annual Newport to Ensenada International Yacht Race is the largest sailboat race in the world.

Boating activities are organized by five private yacht clubs, along with Orange Coast College, UC Irvine, and the Sea Scouts, all of which have sailing, rowing, and water activity bases on the harbor. The Newport Aquatic Center allows open public participation in competitive rowing, canoeing, kayaking, and outrigger canoe racing. The Orange Coast College School of Sailing and Seamanship offers recreational and professional sailing and mariners’ courses and certifications, including United States Coast Guard licensing. Weekly races take place during the summer including the Beer Can Races.

On the Balboa Peninsula, the historic Balboa Pavilion and Balboa Island Ferry are the city’s most famous landmarks. Adjacent to the Pavilion, the 500 passenger Catalina Flyer provides daily transportation to and from Avalon, located on Santa Catalina Island. The Balboa Fun Zone is also home to the Newport Harbor Nautical Museum.

Balboa Island village draws many visitors. A waterfront path around the island attracts walkers and joggers, and provides easy access from the ferry to the shops and restaurants.

Upper Newport Bay, or the Back Bay, is ringed by Back Bay Drive and a network of trails and paths that attract bicyclists, rollerbladers, joggers, and walkers. Bird watchers and nature lovers are drawn to the Upper Newport Bay Ecological Reserve and Peter and Mary Muth Interpretive Center; and Crystal Cove State Park features tide pools at its beach, with backcountry hiking and mountain biking trails. Camping is available at Crystal Cove State Park, and at the Newport Dunes Waterfront Resort and Marina. Whale watching is also popular in the area, with both scheduled and charter boats leaving directly from Newport Harbor. Whales and dolphins can often be seen from the Balboa and Newport Piers, as well as the shoreline during migration season.

Fishing is also extremely popular in Newport Bay, off the coast of Newport, and along the Newport Bay Jetty. Within the bay, there are multiple locations to purchase bait for dockside or spear fishing convenience. There are about 80 fishable species located in Newport Bay. A few of the most commonly fished species are include the Gray Smoothhound Shark, Leopard Shark, Round Stingray, Shovelnose Guitarfish, Pacific Staghorn Sculpin, Silvery Mullet, Top-smelt, California Halibut, Spotted Sand Bass, Yellowfin Croaker, Bat Ray, Thornback Ray, Diamond Turbot, Shiner Surfperch, Corbina, Opaleye, Pile Surfperch, and Red Shiner. Commercial fishing is also prominent in offshore Newport Beach and Newport Bay. Lobsters are commonly fished in the reefs. The bright orange Garibaldi fish found offshore, however, is a protected species.

On dark nights, intense occurrences of bioluminescence can be observed when waves splash into the shore, or when marine animals leave glowing traces in their wake.

The boardwalk is a natural draw for bicyclists. Beach cruiser bikes can be rented at several places on the Balboa Peninsula. Bicyclists are also drawn to Back Bay Drive and the bike paths around Upper Newport Bay; the hilly roads winding through Newport Coast and the San Joaquin Hills; and the mountain biking trails in the San Joaquin Hills and Crystal Cove State Park. Pacific Coast Highway provides access to these areas and is a major bicycle route through the region, despite being shared with heavy motor vehicle traffic.

Many neighborhoods in Newport Beach are amenable to bicycling. Locals are inclined to use bicycles for short trips, especially to get through summer beach traffic and avoid motor vehicle parking shortages.

Fashion Island at Newport Center is a regional shopping and entertainment destination. Also at Newport Center, the Orange County Museum of Art exhibits modern and contemporary art, with emphasis on the work of Californian artists.

Dining in Newport Beach, like many oceanfront towns, tends to focus on seafood restaurants but there are a variety of restaurants that range in price and type of food.

If you are a Newport Beach, CA home buyer, our foremost goal is to provide you with exceptional customer service. Our goals are to help you purchase the right home, make sure you don’t miss out on any homes that meet your needs, and make sure you don’t pay too much for your next home. Please utilize our Newport Beach, California real estate expertise to make your home search and buying experience as stress free and rewarding for you and your family as possible.

If you're considering selling your Newport Beach, California home, we utilize the latest, cutting-edge, real estate marketing tools to expose your property to the widest range of potential buyers. We are here to get your house aggressively marketed to sell as quickly as possible and for the best price! Our goals are to help you get your Newport Beach, CA home sold, put you in the strongest negotiating position as possible, and to make it easier for you and reduce surprises.